The Metro Vancouver Walkability Index (VWI) was developed at the University of British Columbia using parcel-level land use data from the British Columbia Assessment Authority, street network data from CanMap, and census data from Statistics Canada, all integrated within a Geographic Information System (GIS). The VWI is a high-resolution spatial database used to measure walkability and quantify physical urban environment features across neighbourhoods in the Metro Vancouver region. The index’s composite walkability score, for example, provides a relative value that varies from -7.5 in the least walkable areas up to as high as 12.0 for the region’s most compact and walkable neighbourhoods.

Walkability Surface. A map of walkability index values for all of Metro Vancouver in 2005. 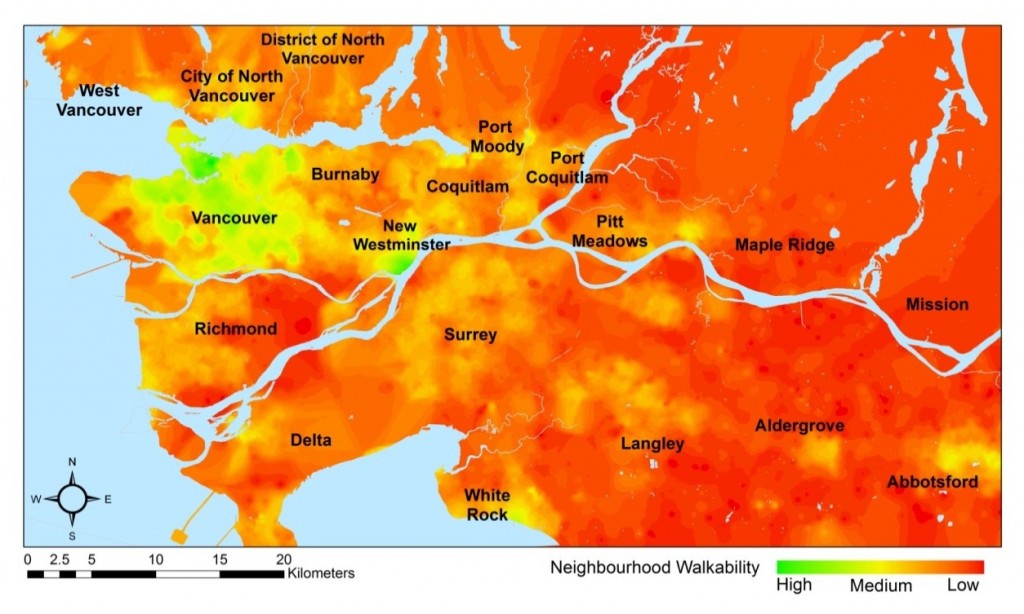 Highly walkable neighbourhoods generally have a more compact urban form characterized by medium to high residential densities, a concentration of nearby commercial (retail) uses, a functional mixing of land uses, and a high degree of connectivity (i.e. small block sizes, higher number of intersections). These characteristics suggest that overall walkability of a street or neighbourhood is the product of a collective effect of density, connectivity, and land use mix. Highly walkable neighbourhoods in the region include Downtown New Westminster, the Waterfront in White Rock, and Ambleside in West Vancouver.

As measured neighbourhood walkability decreases, so to does the presence of relatively higher residential densities, mixing of land uses and a more direct and connected grid street pattern. The built environment characteristics of Metrotown in Burnaby, Steveston in Richmond, and parts of Nicomekl in Langley City are all illustrative of moderately walkable areas in Metro Vancouver.